If you’re new to Medicare and don’t sign up for Part B when you’re first eligible, you may end up having to pay the Part B late enrollment penalty. The late enrollment penalty is imposed on people who do not sign up for Part B when they’re first eligible. If you have to pay a penalty, you’ll continue paying it every month for as long as you have Part B.

What is the Penalty for Not Taking Medicare Part B?

The Part B penalty increases your monthly Part B premium by 10% for each full 12-month period you waited before signing up. The penalty is based on the standard Part B premium, regardless of the premium amount you actually pay. 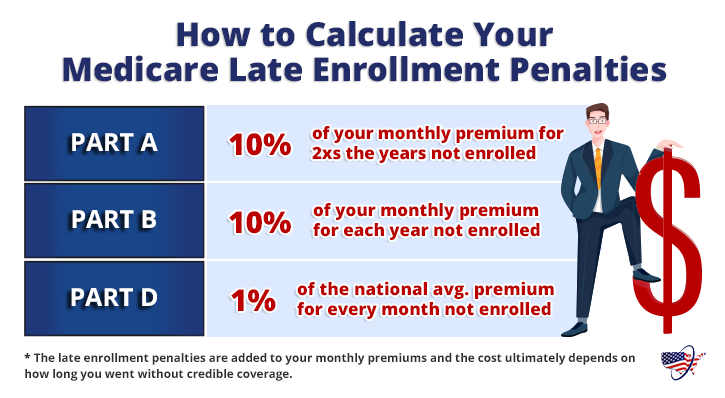 Here are some examples of the way the penalty works:

Listen to this Podcast Episode Now!

How Can I Avoid the Medicare Part B Penalty?

If you enroll at this time, your coverage will not start until July 1st. Meaning you may be without insurance if you have a sudden illness or injury. You can also apply for a Medicare Savings Program to avoid the Part B late enrollment penalty.

When Does the Part B Penalty Not Apply?

Also, those under age 65 with Medicare disability and paying a Part B late enrollment penalty won’t pay the penalty after turning 65. Further, those with Medicaid won’t worry about Part B premiums and penalties since the state pays those.

Finally, anyone living outside the United States that doesn’t get premium-free Part A, can’t enroll in Part A or Part B abroad. But, these people will get a Special Enrollment Period for three months after returning to the United States.

Enrolling during those three months means you’re not liable for late penalties. You may also be able to qualify for equitable relief if a federal employee told you that you didn’t need to sign up for Part B when you were supposed to enroll.

How Do I Appeal the Medicare Part B Penalty?

If you feel that the Part B penalty shouldn’t apply to your current situation, ask for a review. Medicare has reconsideration request forms to file an appeal. Unfortunately, you’ll still have to pay the penalty while waiting for your review to be processed.

Is there a Cap on the Medicare Part B Penalty?

As of now, there is no cap on the Part B late enrollment penalty. Yet, the Medicare Part B Fairness Act or H.R.1788 is a bill that would cap the amount at 15% for the current premium.

What if I Don’t Sign Up for Part B because I Have Other Health Insurance?

If you have health insurance through your employer, your spouse’s employer, or a union, you can keep your coverage. You won’t have to pay a penalty for waiting to sign up for Part B. But, if you lose your coverage or stop working for that employer, the clock begins to tick.

Usually, you will be allowed to sign up for Part B right away, during a “Special Enrollment Period.” This is an eight-month period beginning when the employment coverage ends. If you do not enroll during this period, you’ll have to pay a Part B penalty for each full 12 months you wait, beyond the date, the SEP began.

For example, if you’re still working when you turn 65, you can keep your employer health insurance instead of signing up for Part B. If you then retire at age 67, you can avoid a penalty by signing up for Part B during your eight-month SEP. If you instead decide to wait until age 70 to enroll, you will pay a 30% penalty every month. 10% for every 12-month period you delayed.

How to Avoid the Medicare Part B Late Enrollment Penalty

The best way to avoid Part B penalties is to plan ahead. You have several Medicare options to choose from, including Original Medicare plus a Medigap Plan. MedicareFAQ can help you through these decisions by answering your questions and helping you prepare for Medicare. Call the number above or fill out our online rate form to see all the options available in your area.

How TRICARE Works with Medicare

Beneficiaries eligible for both TRICARE and Medicare should understand how the two medical insurance programs work together. Medicare consists of...

How to File a Fast Medicare Appeal

If Medicare denies coverage for a healthcare service, item, or medication, you have a right to appeal. You can also...