Medicare For All-Pros and Cons

Medicare For All-Pros and Cons 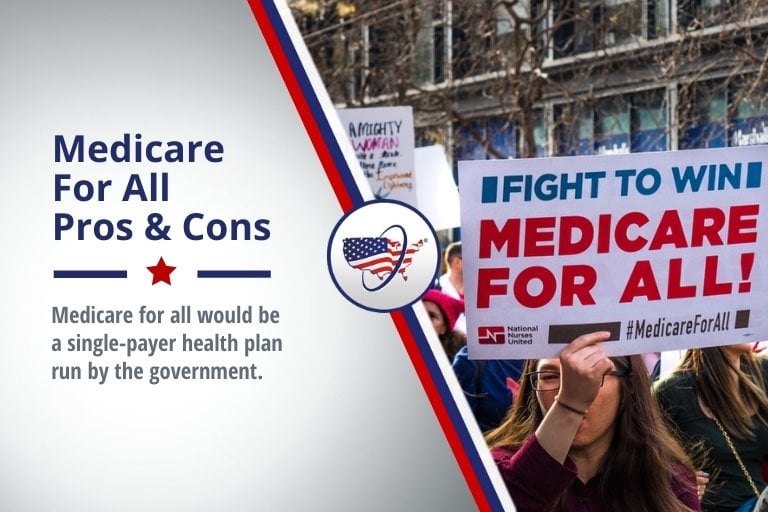 Medicare for All would provide a single-payer health plan, run by the government, for everyone. Currently, Medicare is a federal program providing health coverage to those 65 and older and certain disabled individuals. While it’s clear that Medicare for All is unlikely under this administration, it’s certainly a topic many are discussing.

Pros and Cons of Medicare for All

The most significant benefit to Medicare for All is that the government covers healthcare costs while ensuring doctors provide reasonably affordable quality care. In theory, universal healthcare leads to a healthier society and workforce. But, the biggest downside is that healthy people pay for the medical care of less healthy people.

Pros of Medicare for All:

Cons of Medicare for All:

How Does Single-Payer Healthcare Work

Single-payer healthcare is a form of universal healthcare financed through taxes. This coverage would provide essential healthcare for all, and a single public paying system would cover costs.Canada uses a single-payer system to contract healthcare services from private organizations. Whereas the United Kingdom owns healthcare resources and employs personnel.

Single-payer only means a single public authority pays for healthcare. This kind of system pays for all covered healthcare-related services.

How Much Would Medicare for All Cost

A single-payer healthcare system would cost the government a tremendous amount. According to the Mercatus Center at George Mason University, Medicare for All would cost $32.6 trillion from 2022-2031.

Medicare for All would be paid for by:

Medicare for all would replace the Affordable Care Act and provide everyone with healthcare. Funding for this program would come from the public, much like Medicare and Medicaid.

How Medicare for All Proposals Would Directly Impact Medicaid

Medicare for All would eliminate Medicaid. Medicaid is the most extensive health insurance program in the United States, covering over 73 million Americans.These beneficiaries would lose their coverage with Medicaid or CHIP and obtain Medicare for All coverage. Yet, the needs of those who are on disability or recently incarcerated will also require consideration.

Public Opinion and Medicare for All

Vermont Senator Bernie Sanders is a driving force behind the Medicare for All proposals. In theory, a public option plan could be more affordable for Americans.

According to a KFF poll, 56% of citizens support Medicare For All. Yet, 68% like a public option where a government plan competes with private insurance and is accessible to all Americans.

Universal health coverage could offer every American affordable, reasonable care. People sometimes go to the emergency room for basic care because they would be turned away from other places for lacking coverage.

The highest tax is on those making more than $10 million annually. But, the average American would see lower copays and better coverage.

Also, the program is likely to be more efficient. With only one public agency run by regional boards, there would be higher job satisfaction for doctors. Thus, more students will want to be doctors.

People currently receiving free-market healthcare in other countries pay less than half the cost we pay in the United States. They have quality healthcare for their entire lives and peace of mind knowing they have this coverage.