Your Guide to Medicare in New York for 2022

Medicare Supplement plans in New York give beneficiaries year-round open enrollment. While the plans are the same as other areas across the country, New Yorkers have quite a few extra perks. In this guide, we’ll discuss Medigap, Medicare Advantage, Part D, and more.

First, let’s go over the details on how Medigap is unique in New York and the ways it impacts you.

New York has a year-round Medigap Open Enrollment Period. So, you can apply for a Medigap plan at any time of the year without having to answer any health questions. But, the downfall is premiums tend to be higher.

During the year, you can enroll in Medigap, and insurance companies can’t deny you or charge a higher premium due to health status. While plans may include a pre-existing condition waiting period, it generally only applies if you didn’t have creditable coverage in the last 63 days. But, if you did have creditable coverage, chances are the waiting period could be waived.

No Part B Excess Charges in New York

New York is one of the few states that does not allow excess charges. Regardless of which carrier you decide to go with, the letter plan benefits will all be the same. Any plan that allows excess charges won’t apply to residents in New York.

What are the Top Medigap Plans in New York?

The Best Medigap plan in New York is Plan N. But, if you’re not newly eligible for Medicare, Plan C could prove beneficial. Since excess charges aren’t allowable in New York, comparing the cost of Plan F and Plan C could save you money. Further, comparing the cost of Plan G and Plan N could be beneficial. Again, since excess charges aren’t allowable, choosing a plan that doesn’t cover excess charges gives New Yorkers a chance to save money on premiums without worry about an extra fee. Of course, if you travel out of the state for care, you may be responsible for paying those excess charges.

What are the Best Medicare Advantage Plans in New York? 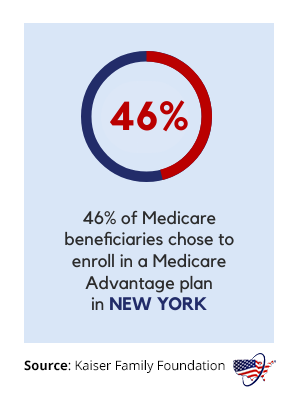 The top Medicare Advantage plans in New York are the Humana Choice PPO, Aetna Medicare Elite Plan, and the Aetna Medicare Premier Plan. Now, these plans can change each year. So, while they may be popular, they might not be the best option for you. For example, if your doctor isn’t in the network of these plans, another option could be more suitable.

Private insurance companies offer Medicare Advantage plans. They’ve been approved by Medicare and are usually an HMO or PPO plan. Whichever carrier you chose will then take over as your primary coverage.

You still need Part A and Part B to have a Part C plan, but many Advantage plans include Part D drug coverage. When you’re looking at plans, you’ll want to ensure it covers the medications you take. Otherwise, you could be responsible for the full cost of the drug.

What is the NYC Medicare Advantage Plus Plan?

The Medicare Advantage Plus Plan is a new option for Medicare-eligible, retired New York City workers in any U.S. state or territory. A premium-free program, this coverage replaces the previous, comparable option of the GHI/Empire BlueCross BlueShield Senior Care Program. The program comes as a result of a collaboration between the City and the nonprofit Municipal Labor Committee (MLC).

This Advantage plan includes perks unavailable through its predecessor. These benefits include coverage for transportation to doctor visits, meal delivery post-hospital discharge, fitness and wellness programs, and no copay for telemedicine services on the preferred platform. The plan is a Group Medicare PPO, yet it pays for participants to see any provider accepting Medicare assignment in addition to those in the network.

Upon this plan becoming available, those eligible and with Original Medicare enroll automatically on the first of the year, if they didn’t first opt out between September 1 and October 15. Additionally, New York City will continue to reimburse Part B premiums for those who qualify for the New York City Medicare Advantage Plus plan.

What Part D Plan in New York are Most Favorable? 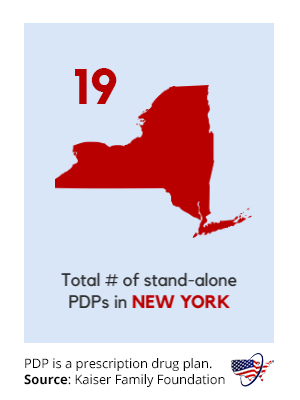 The top Part D plans in New York are SilverScript Choice, Humana Walmart Value Rx Plan, and Cigna-HealthSpring Rx Secure-Essential. Now, these won’t be the best option for everyone; they’re just the most popular. For someone that multiple medications, having a plan that covers all those meds is the most critical factor. Before you enroll in a Part D plan, verify your drugs are on the plan’s formulary.

Medigap, Part A, and Part B don’t cover any prescription costs. It’s your responsibility to select a policy to avoid a late enrollment penalty for going without Part D if you don’t enroll when you’re first eligible. But, if you have a form of creditable coverage, you won’t be penalized.

If you don’t sign up when you’re first eligible, you can sign up during the Annual Enrollment Period.

How to Apply for Medicare in New York

New York Medicare Supplement policies can help beneficiaries pay medical bills. All Medigap plans have a difference in costs depending on which carrier you chose. Be smart and compare all Medicare Supplements available in your area. MedicareFAQ can help guide you to find the best supplemental insurance for you. Call us at the number above or fill out an online rate form today to learn about rates in your area!

It’s free and no obligation!