Did you forget to sign up for Medicare when you were first eligible? Well, the General Enrollment Period is your chance to get in on the coverage you’re entitled to. Those eligible for Medicare that delay enrollment for one reason or another will need to sign up during this period.

What is the General Enrollment Period for Medicare?

The General Enrollment Period for Medicare takes place from January 1 through March 31 of every year. When you enroll during this time, your coverage begins on July 1. It’s likely since you delayed enrollment that you’ll pay a Part B late enrollment penalty.

Listen to this Podcast Episode Now! 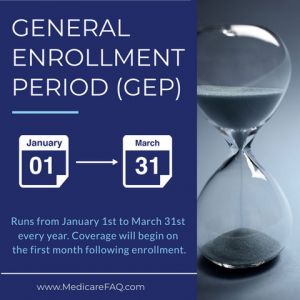 You can use the Medicare General Enrollment Period to enroll in Part A or Part B at any time during January, February, and March.

The coverage won’t go into effect until July 1; you won’t have your health care until then.

That’s why it’s crucial to take advantage of your Initial Enrollment Period.

For the most part, if you delay enrolling when you’re first eligible, you risk having to pay a Part B late enrollment penalty.

Can I Apply for Medicare Part B During GEP if I already have Part A?

If you already have Part A and only need to enroll in Part B, you will need to complete this form. Once complete, you can either mail it to the Social Security office or bring it to them in person.

Can I Delay Part B During the General Enrollment Period?

The only circumstance you can generally delay Part B and avoid a late enrollment penalty is if you’re actively working past 65 and enrolled in employer coverage. Or if you’re covered under your spouse’s employer group plan.

If you delayed enrolling in Part B due to having creditable coverage, such as group coverage through your employer, you don’t have to worry about being impacted by the Part B late enrollment penalty.

How Does the General Enrollment Period Work with Part D?

Just like Part B, there is a Part D late enrollment penalty if you don’t sign up when you first become eligible. However, the penalty is calculated by the number of months you delayed coverage vs. the number of years.

When is the General Enrollment Period for Medicare Advantage?

You can enroll in a private Medicare Advantage plan from April through June with a July 1 effective date.

How to Get Help During the General Enrollment Period

Nobody should have to navigate the Medicare maze alone. Here at MedicareFAQ, we believe in helping you find the policy that brings you the most value. Since we work with a variety of carriers, we make shopping for Medicare insurance simple. No matter which Medicare sign-up period you need to use, we can help you.

Contact us today at the number above, or use our rate form to get started now.