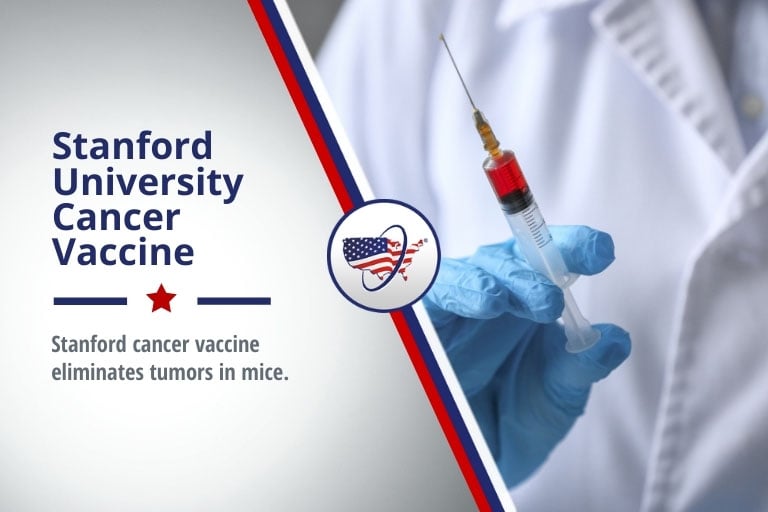 The search for a cancer cure has spanned the history of modern medicine. A promising development at the Stanford University School of Medicine where a cancer vaccine eliminates tumors in mice.

This discovery is a milestone and a significant advancement in medical science. The researchers’ study indicates that injecting minute amounts of two immune-stimulating agents directly into solid tumors in mice can eliminate all cancer traces, including distant, untreated metastases.

The researchers observed that cancer therapy works for many different types of cancers, including spontaneous cancers. Although this study was on mice, the results show promise for a cancer-curing vaccine for humans in the near future.

The study was led by Stanford University researchers Ronald Levy and Idit Sagiv-Barfi. The research showed that the local application of minimal amounts of specific agents could serve as a rapid and relatively inexpensive cancer therapy. It’s unlikely to cause the adverse side effects often associated with bodywide immune stimulation, which is currently a standard cancer treatment.

“Our approach uses a one-time application of very small amounts of two agents to stimulate the immune cells only within the tumor itself. In the mice, we saw amazing, bodywide effects, including the elimination of tumors all over the animal.” Levy stated.

The approach worked startlingly well in laboratory mice with transplanted mouse lymphoma tumors in two sites on their bodies. Injecting one tumor site with the two agents caused the regression not just of the treated tumor, but also of the second, untreated tumor.

This indicates that the vaccine eliminates additional cancer traces after the destruction of the mouse’s. They program the cells of the mice to destroy the tumor and fight cancer cells.

Through these injections, 87 of 90 mice no longer test positive for cancer. Although cancer recurred in three of the mice, the tumors again regressed after a second treatment.

The researchers saw similar results in mice bearing breast, colon, and melanoma tumors. One of the agents is currently already available for use in humans. But. the other has been tested for human use in several unrelated clinical trials.

Currently, they are launching a clinical trial to test the effect of the treatment in patients with lymphoma. The method works by reactivation of the cancer-specific T cells. Reactivation is achieved through the injection of microgram amounts of two agents directly into the tumor site.

The first agent, a short stretch of DNA called a CpG oligonucleotide, works with other nearby immune cells. It amplifies the expression of an activating receptor called OX40 on the surface of the T cells. The second agent, an antibody that binds to OX40, activates the T cells to lead the fight against the cancer cells.

Because the two agents are injected directly into the tumor, only T cells infiltrated are activated. These T cells are effectively “prescreened” by the body to recognize only cancer-specific proteins.

The results were encouraging. Of the 29 lymphoma patients, almost all saw their tumors at the treated site shrink. Also, nearly every patient saw a reduction in tumor volume. They engineer CAR-T (chimeric antigen receptor) cells to fight cancer cells. But, this gives hope for the progress of better treatment for cancers.